For those that read our previous article titled “What is Muay Thai?” you may be curious about what gear you will need before starting. Here is everything you need in order to begin learning Muay Thai

Gloves are meant for protecting your hands and your partner. Check out the pro shop by the front desk to get a view of our glove selection. We offer some of the best gloves in the market for Muay Thai, or any other striking arts found at The Arena. Windy and Fairtex are both excellent options for Muay Thai gloves.

Shin Guards are meant to protect the wearer and partner from bone on bone contact during drills and sparring. In Muay Thai, a heavy emphasis on kicks means that fighters should invest in a quality pair of shin guards to protect themselves and their partners. The Arena sells a great pair of Combat Sports shin guards at the pro shop that work for all of our striking classes.

Mouth Guards are essential for any sparring session. Shock Doctor makes an excellent boil-and-bite mouth Guard, which can be found in The Arena’s pro shop. If you would like to spend a little extra money on safeguarding your teeth, you can always opt for a custom mouth guard from your dentist’s office.

In order to start sparring, you’re going to want a good groin protector. When selecting a cup, you want to make sure that your cup gives you freedom of movement while still offering complete protection from low blows. At The Arena our coaches always focus on teaching proper technique and getting our fighters and members ready for combat. If you’re just looking for a cardio class, look somewhere else. We build fighters! If you are looking to learn one of the most comprehensive striking arts on the planet, then consider looking into The Arena’s Muay Thai program. The Arena offers 12 Muay Thai classes throughout the week with our incredible Muay Thai coaches, James Ewton and Kru Mark. But you may be wondering “What is Muay Thai?”.

Muay Thai is a form of striking originating from Thailand in the 1500s. Modern day Muay Thai shares many similarities with other striking arts like kickboxing, but Muay Thai significantly expands the traditional kickboxing ruleset.

Muay Thai fighters or “Nak Muay” are allowed to throw any combination of kicks, punches, elbows, and knees, to the head, body, and legs of their opponents. Nak Muay are also allowed to catch the kicks of their opponent in order to sweep them or counter. This ruleset differs from kickboxing, which forbids elbows, some knee strikes, and catching kicks.

Perhaps the biggest difference between Muay Thai and other striking martial arts is the use of the clinch. Clinching is when two fighters grab ahold of each other’s arms, body, neck, or head, in an attempt to maneuver them around for a sweep, trip, knee strikes, or elbows. While in western boxing and kickboxing, you may see two fighters immediately separated after they engage in the clinch, in Muay Thai, the action is allowed to continue in this position.

If you have an interest in watching some Muay Thai legends, check out the following list of names on YouTube. Following the launch of our new Arena Boxing shirts last week, many were left curious about the origin of the shirt’s epigraph “Since 1949”. While we are always excited about where our gym is headed in the future, we want to take an opportunity to pay homage to our past. This is the story of how The Arena Gym came to be.

Our story begins in Iowa in 1937 with Aloysius “Al” Holtmann. Holtmann enlisted in the Marine Corps at age 21 and later that year, graduated from the Marine Corps Recruit Depot in San Diego, California. Al was stationed in Hawaii from 1938-1940, where he met Legendary Okazaki Seishiro. Under Okazaki Seishiro, Al began to learn Danzan-Ryu Jujutsu, a Japanese martial art containing elements of Jujutsu, Karate, Boxing, Wrestling, and Judo. Two years later, Holtmann received his Mokuroku from Seishiro, which enabled him to begin teaching Danzan-Ryu.

The outbreak of the Second World War in the early 1940s led to Holtmann’s deployment to the Pacific theater. There, he saw combat in some of the bloodiest battles of World War II, including Guam and Okinawa. Upon the war’s end, Holtmann retired from the Marine Corps and attended San Diego State University, all while continuing to teach Judo at the San Diego YMCA. After graduating college in 1949, Al founded his own club under the name “San Diego Judo Club”. Growing intrigue in Japanese culture and martial arts during the 1950s resulted in a surge in membership at Holtmann’s club. San Diego Judo Club was frequently featured in local newspapers and magazines, including the first edition of Black Belt magazine (America’s oldest martial arts magazine) in 1961.

Over the course of the next 5 decades, Holtmann taught over 100,000 students at his academy. Following his death in 2001, he was posthumously awarded his 6th degree black belt from Kodokan Judo headquarters in Tokyo. Holtmann’s student, Sensei Gene Mauro, took over the school after Al’s death. A 7th degree blackbelt and former Judo National Heavyweight Champion, Mauro led the school from 2002 until 2005. In 2006, San Diego Judo Club moved from its original location on 30th Street, to its current location at 3350 Sports Arena Blvd, and changed its name to The Arena. Today, The Arena is the second oldest martial arts school in the country and the largest school in North America. 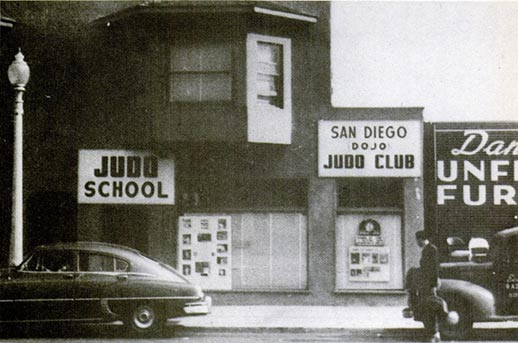 Coach Vince teaching some subtle footwork for defense and getting reactions from the opponent at 11am Kickboxing. Come in and train! From member to staff, David Mottola discussing his journey from rowing in college to running marathons to entering the world of Kickboxing and Muay Thai. David discusses how fulfilling these activities have been to not just his physical body but to his whole life. We really enjoy these spotlight videos to give you a peek into how all these people from different places in life have all grown to love martial arts, and especially The Arena.

David Mottola:
I always knew that I want to try rowing. So I hopped into rowing right when I got into high school and fell in love with it immediately. And I was lucky enough to get recruited for college down the line. And I went and competed in college and beyond. I competed on the U-23 National Team as well.

For most of my time that I rowed, I hated running. I hated it. I couldn’t stand it. But maybe about a year or so before I stopped rowing, I realized that it was my favorite way to cross-train. I started running every day. So right now, I’m training to run the Rock ‘n’ Roll Marathon, see how fast I can go. And then down the line, what I would love to do is do an ultramarathon. I’m not at that point yet, but knocking out a race of 50 miles or plus would be my ultimate goal with running. That’s really what I’m aspiring to do.

I’ve been interested in learning martial arts pretty much my whole life, but I just never really felt the confidence, I guess, to take the step into the world until about four or five years ago. I was living in DC at the time. And eventually, I just said, “Whatever, I’m going to walk into this gym and see what happens.” I was interested in doing Muay Thai and kickboxing. It’s been totally transformative. And I owe a lot of my personal growth as an athlete, but also as a person to martial arts.

I moved out to California about five or six months ago, and I just started training at The Arena pretty much right away. I think within the first three days of me being in California and being in San Diego, I walked in the door and signed up after just getting a tour of the place and seeing how amazing it was. The past six months of being here have been incredibly powerful in terms of my own growth as a person and a martial artist. In keeping with our tradition of providing our members with top of the line equipment, The Arena Combat Sports Gym is thrilled to announce that we have replaced all of our heavy bags in the striking room. This is a part of our ongoing commitment to ensure that the resources available at The Arena are second to none. Check out these new ringside bags next time you’re in the striking room. 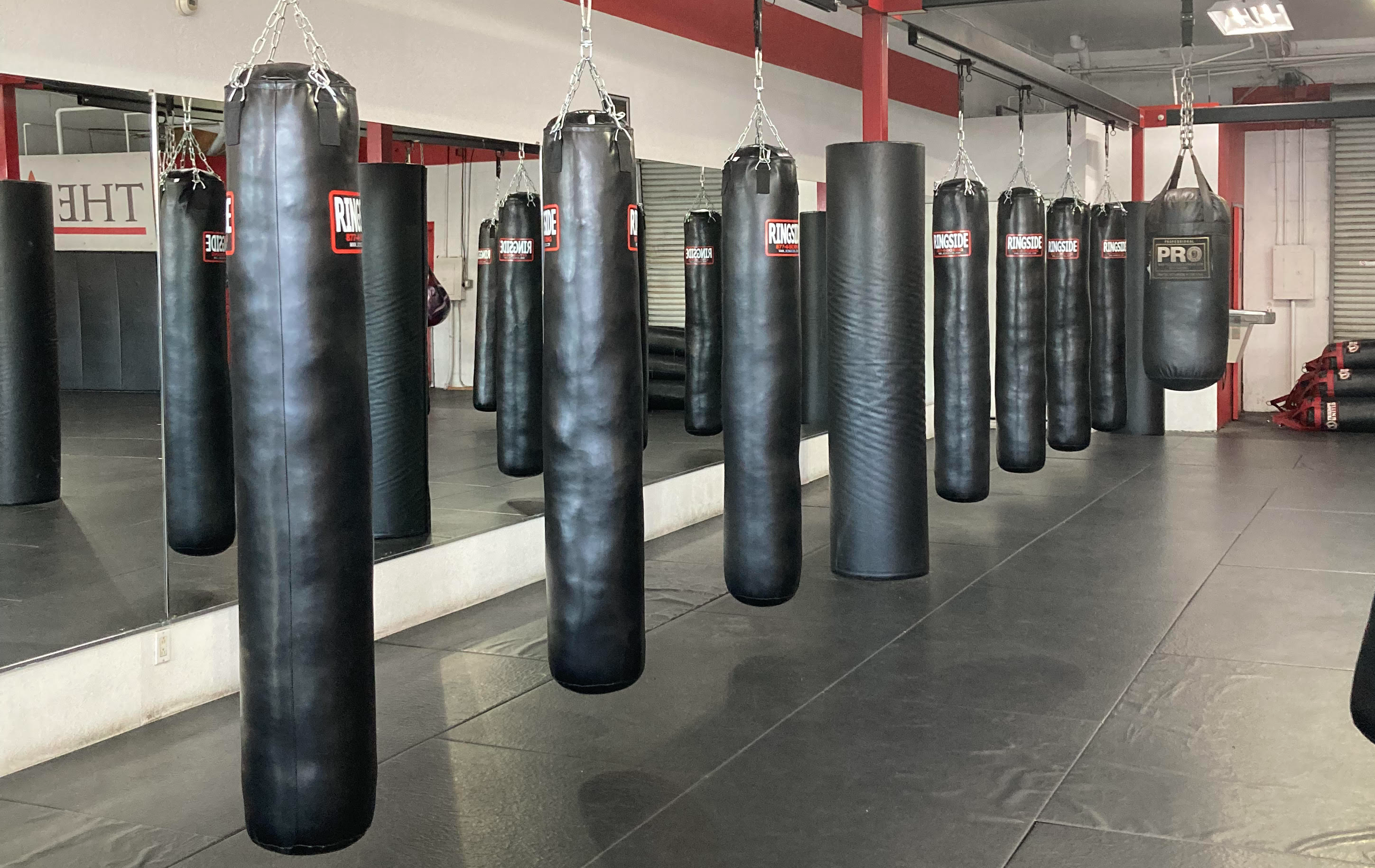 If you want to learn how to fight, then The Arena is the gym for you. We offer over 130 classes per week, in 10 different combat sports. Come check it out!

The joy of taking a new member in and sharing these amazing martial arts with them is what drives us as a gym. We know it’s intimidating to start training, but if you do and you trust the process, Martial Arts will change your life.

Taylor Fox:
My name is Taylor Fox. Moved out here for school, had no interest in MMA, boxing, any combat. And then I started watching UFC, started watching boxing. So I came down here to The Arena. October of 2020, came to one class. The next day I had a pretty bad injury that set me in the hospital for like two months. About December, I’d say after my injury, Vince helped me. I wrecked my left arm. So for about two months straight, we just worked my right arm. Was able to use my left arm in about February.

Started being able to fully train with everybody. Kickboxing, boxing, Muay Thai. In about November, I took my first competition. I lost in kickboxing. Two weeks later, I fought again. I won in Muay Thai and I’m looking to compete again pretty soon. I want to compete in boxing, kickboxing, Muay Thai, Jiu Jitsu, MMA. I’m going to take my sweet time with that, because I want to be the best at that. The Arena Gym is excited to announce our All New Arena App fresh for 2022. If you’re reading this, then you’ve already taken the most important step and downloaded the app. The App will allow Arena members to earn Rewards points that have cash value and will be redeemable for Arena Gear, Apparel, and even Membership Dues. The referral feature includes easy access to your contacts using a variety of communication platforms including SMS text, Email, Facebook, IG, and others. 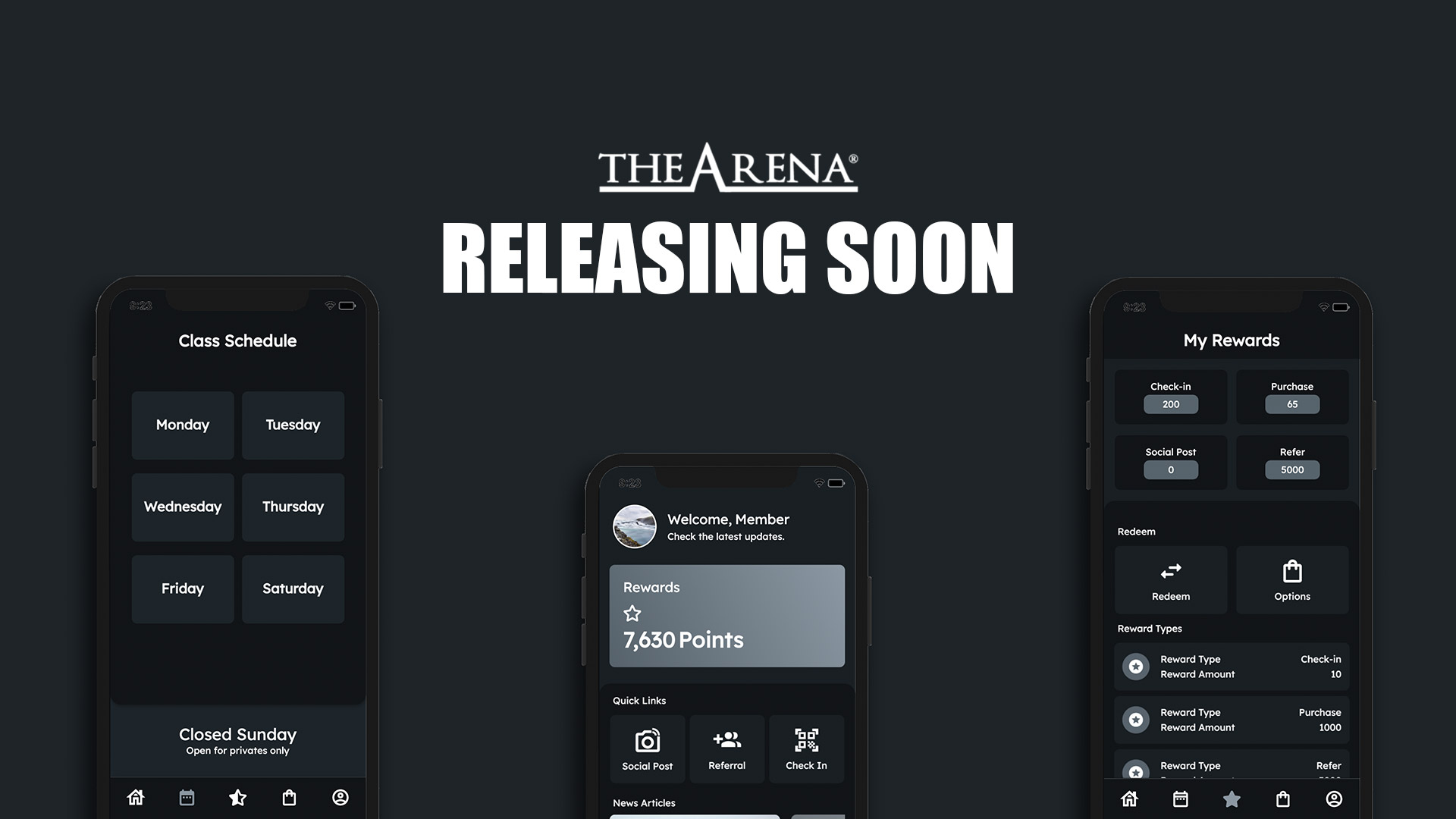