The Arena Boxing Team is on the move again to compete. This weekend in Nogales, Mexico Coach Joe Vargas takes 4 of his pro boxers to continue their journey! Ulises Sierra, Brandon Cruz, Adan Palma and Jabin Chollet will all be ready!

It’s exciting to have all four on the same card, cheering for each other and just supporting each other, and Jabin will have his teammates there for his debut, to support him. It just feels so good to be back at it, in business, boxing wise. Like these guys, staying busy, for the last year and a half has been very slow and few guys fought, but now having these guys… Just getting the ball rolling again, it’s exciting. You know, the energy in the gym, all these guys ready to fight again. Just makes it that much fun to be back at it. There are levels to Combat Sports. Lots of “coaches” can make you tired, have you blast pads, and tell you you’re doing great. At the Arena our staff of coaches are professional coaches who are students of the game with DECADES of experience at all levels of the sport. They can not only teach fundamentals but they can see what is best for each person individually and actually employ strategy based off the fighters natural abilities, body type, opponents etc. There’s a difference in what we do and it has been proven in hundreds of competitions for over a decade.

Coach Joe Vargas:
A hook needs to be wide because you’re inside. You’re going to create that power right here. That one. I’ll have my hand up. Right? One, two, and then from here, this hand has to come behind my gloves. Boom. So this one has to be wide and turn your hip on it.

So, here, push me off a little bit. Push me off. So, you open me up, right? I’m open right there. Look at those ribs. Boom, reload, boom, and look how far your head is for me. So, once you’re that far from me, I’m coming wide.

Coach Basheer Abdullah:
You’re giving your opponent the space to throw the long shots. Almost like what Stephan was doing today. He was jabbing down, throwing across, and he popping out against a guy with long hands and he was catching him every time. So I say, “Sit in the pocket. Just throw your hands up and smother the shot.”

Okay? So he started doing this, boom. Like this versus popping out. Okay? Creating the space for the long, cross along jab.

Yeah. And then chamber it, yeah. So a lot of that is just decided by how much space you give. So, sometimes you’ll see he’ll slide from this leg and sidekick, and that’s because there was more space. Denise Moran is the 2020 USA Boxing Amateur National Champion in the 125 lb division. Her amazing work ethic along with the coaching of Basheer Abdullah have helped her achieve her dreams, and she is still rising from here!

Denise Moran:
My name is Denise Moran. I am a two-time State Golden Glove Champ, a two-time Desert Showdown Champ, and most recent, 2020 USA Boxing National Champ. I’ve been boxing on and off for about 10 years. Moved out here about two years ago, not looking to fight anymore, but walked into the doors of the arena and was introduced to Coach Basheer. At the beginning, I’m not going to lie, Basheer wasn’t really looking to bring me on, just because I did mention that I wasn’t looking to compete. I saw what type of coach he was, and I fell in love with his vision. I fell in love with his patience, his technique, and I just kept coming back until I gave him no option to say no.

I just would start coming twice a day and, at some point when somebody asked me if I was competing again, I said no. And they said, “Why not?” And I really didn’t have an answer to give them. So, I took a step back and I reassessed and told myself, “There’s no reason why you shouldn’t be competing.” So, once I made that final decision that I was going to get in there, we got ready for the 2019 State Golden Gloves.

But unfortunately, due to COVID, we were not able to compete. Finally, they said 2020 US Nationals for April of 2021 and finally got my chance to showcase my skills and my hard work. I manifested it. I worked my ass for it. I would wake up every morning and run three miles, four miles every morning. And as I’m running, I’m saying it. 2020 USA Boxing National Champion Denise Moran. And now I’m saying 2021 USA Boxing National Champ Denise Moran because that’s where I’m headed, and I’m going to come back home with that win, and end the year right. Young Professional Boxer Adan Palma is ready for his 2nd professional bout this Saturday in Guadalajara. He’s coming off a first round knockout in his professional debut, and we’re excited to see him step in the ring again!

Palma approached me when he was about 11 years old. To be where we’re at now, over 120 amateur fights later, going on the second profile is quite an adventure with that young man. Seeing him grow from a kid who didn’t know how to fight now to fighting men and sparring world champions, it gives me a great sense of pride as his coach to be moving on this path with him. The Arena Boxing Coaches Joe Vargas and Basheer Abdullah take great pride in building up their young fighters, and instilling them with the confidence to work their way through the amateur ranks into their professional careers. Here are just a few of our young athletes in action. 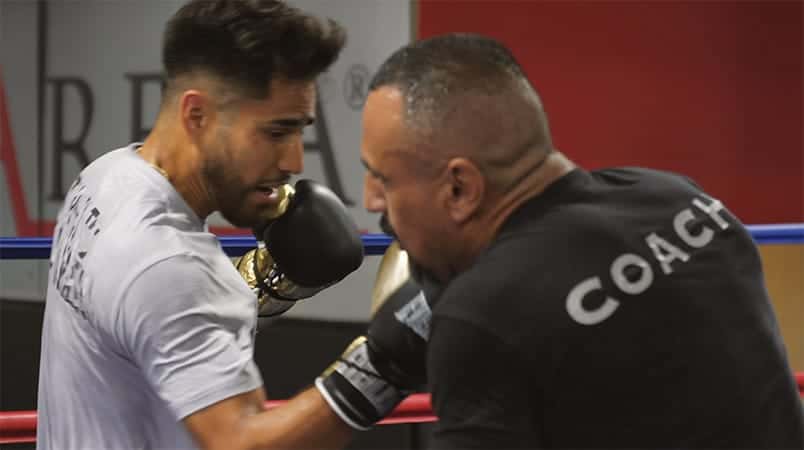 Arena Pro Boxer Brandon Cruz will be back in action for his 10th fight, Saturday September 25th in Tijuana at the Big Punch Arena!

My name is Brandon Cruz, I’m a professional boxer. I’m 7-2 with 5 knockouts. I’ll be fighting David Lugo, September 25th at the Big Punch Arena in Tijuana. I’ve been training with Joe for about a year and a half already. Camp is going very well. We’ve been working a lot on my shots, sitting down, taking our time a little bit, working the defense. This guy’s a really tough kid, he comes forward. Once the opportunity presents itself, we’re gonna be ready for it. Here is one of the Arena Boxing Programs young lions, Adan Palma. Recently making his pro debut, he displays the technical knowledge of a mature fighter because of the million reps he has put in since childhood. The Arena Boxing Team getting some strength and conditioning in at the crack of dawn. Do the extra work when no one is looking to shine under the lights. Champions are made far from the bright lights. Having a deeper understanding of the “WHY” you are learning certain techniques will greatly increase retention. It’s easy to go practice a bunch of moves and get a workout, but fighting involves strategy and understanding of possible outcomes. Here Coach Chuck discusses with his Kickboxing class some of the finer points that affect students’ learning/application of techniques.

Coach Charles Martinez:
Not every single one is for every single person or every single scenario. You may take away from that, “Oh, this one and this one,” and then maybe a long time down the line, you’re like, “Oh, I get it now. I see now this person doesn’t give me that step, or this person, I just show it and they take a step away.” Well, now these options are gone because those are short options. So the right weapon for the job. Sure, you could kick off of that. If you go, “Hey, can I kick off this?” I’ll probably go, “Sure. Depends. What did they do?”

You don’t always get to choose. If they crowd you, then there’s weapons that are short. If they pull, there’s weapons that are long. You don’t always get to decide in your head ahead of time, “I’m going to do this and this.” It just doesn’t work that way. You show something, they give you space, and that’s just your feelers out there finding, “What’s the right tool for this person?” The beginning part of the round, beginning part of the fight, you’re just analyzing their reactions. You should be setting the traps then. “Oh, every time I do this, you go that way?” That should start to register. Sometimes it’s a list, sometimes they’re all applicable. Depends on your skill level. Sometimes all you got was jab, left kick. “Oh, okay. I got it. That’s where you were. It’s fine.” It’s just planting a seed for later. Thank you. Thank you. When you combine world class coaching with a world class facility you get world class athletes. Here we have 4 time Olympic Boxing Coach Basheer Abdullah discussing his boxing teams strength and conditioning program in our 10,000 square foot dedicated strength building.

Coach Basheer Abdullah:
Our strength condition program is one of the six layers we use in preparation. It consists of Olympic lifts and plyometric exercises. We conduct strength conditioning twice a week, every Tuesday and Thursday at 6:00 AM. They don’t like to get up for that, but I’m glad to see the discipline and they put themselves in here and get it done. Again, the strength conditioning is one of six layers, which consist of tactical training, technical training, physical training, mental training, nutrition, and also recovery. It’s a very important part of our training, and we can see good results from it when we use it. We’re usually the most conditioned or the stronger athlete in a ring thus far in our careers.