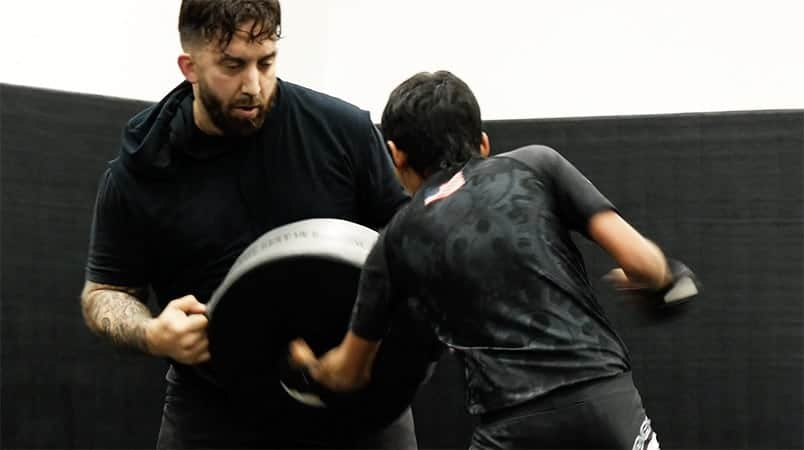 Coach Charles Martinez only trains one kid, and that’s David Daniels. Here is a bit of history on his training and competition experience in Wrestling and Jiu Jitsu. He is competing to represent the US in the Pankration World Championships in Turkey.

Coach Charles Martinez:
So today, I’m training David Daniels, who’s 11 years old, and he’s preparing for USA Nationals, for Pankration, for USFL. If he wins his spot in the Nationals, then he’ll represent America in Turkey at the World Championships. I’ve trained him for a couple of his fights. He’s done over 300 grappling matches, over 200 wrestling matches, done four Muay Thai fights. He’s done four Pankration fights.

Pankration is basically the oldest version of MMA, so it actually came from the Greek Games. And for kids, you don’t want to get hit to the head, you don’t want a bunch of head trauma. So Pankration basically is MMA gloves, shin guards, headgear, and they can punch to the body, take downs, wrestling against the cage, submission. So it’s all put in. It’s a safer way for kids to get introduced into MMA. And this is the future of the sport.

Eventually, the UFC is going to be made up of 25 year olds who started training at five. So David started training when he was five years old. He’s already competed hundreds of times in Jiu-Jitsu, hundreds of times in wrestling. And now, he’s starting really his actual fighting. And this is still just a bridge to get to that higher competition level. So it’s really just preparation. And this is the direction that MMA has to go in order to catch up to things like USA boxing, where they have hundreds of competitions to get ready for their professional career. So David’s a machine.